How Bearings Are Made

Ever since man began to need to move things, he has used round rollers to make the job easier. Probably the first rollers were sticks or logs, which were a big improvement over dragging things across the ground, but still pretty hard work. Egyptians used logs to roll their huge blocks of stone for the pyramids. Eventually, someone came up with the idea of securing the roller to whatever was being moved, and built the first "vehicle" with "wheels." However, these still had bearings made from materials rubbing on each other instead of rolling on each other. It wasn't until the late eighteenth century that the basic design for bearings was developed. In 1794, Welsh ironmaster Philip Vaughan patented a design for ball bearings to support the axle of a carriage. Development continued in the nineteenth and early twentieth centuries, spurred by the advancement of the bicycle and the automobile.

There are thousands of sizes, shapes, and kinds of rolling bearings; ball bearings, roller bearings, needle bearings, and tapered roller bearings are the major kinds. Sizes run from small enough to run miniature motors to huge bearings used to support rotating parts in hydroelectric power plants; these large bearings can be ten feet (3.04 meters) in diameter and require a crane to install. The most common sizes can easily be held in one hand and are used in things like electric motors.

This article will describe only ball bearings. In these bearings, the rolling part is a ball, which rolls between inner and outer rings called races. The balls are held by a cage, which keeps them evenly spaced around the races. In addition to these parts, there are a lot of optional parts for special bearings, like seals to keep oil or grease in and dirt out, or screws to hold a bearing in place. We won't worry here about these fancy extras.

Almost all parts of all ball bearings are made of steel. Since the bearing has to stand up to a lot of stress, it needs to be made of very strong steel. The standard industry classification for the steel in these bearings is 52100, which means that it has one percent chromium and one percent carbon (called alloys when added to the basic steel). This steel can be made very hard and tough by heat treating. Where rusting might be a problem, bearings are made from 440C stainless steel.

The cage for the balls is traditionally made of thin steel, but some bearings now use molded plastic cages, because they cost less to make and cause less friction.

There are four major parts to a standard ball bearing: the outer race, the rolling balls, the inner race, and the cage. 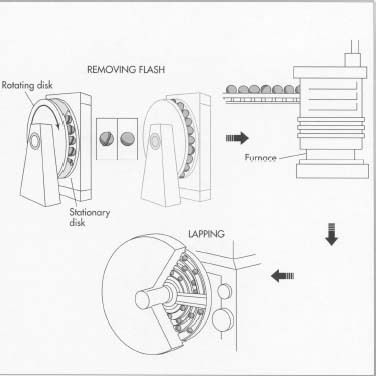 Bearing making is a very precise business. Tests are run on samples of the steel coming to the factory to make sure that it has the right amounts of the alloy metals in it. Hardness and toughness tests are also done at several stages of the heat treating process. There are also many inspections along the way to make sure that sizes and shapes are correct. The surface of the balls and where they roll on the races must be exceptionally smooth. The balls can't be out of round more than 25 millionths of an inch, even for an inexpensive bearing. High-speed or precision bearings are allowed only five-millionths of an inch.

Ball bearings will be used for many years to come, because they are very simple and have become very inexpensive to manufacture. Some companies experimented with making balls in space on the space shuttle. In space, molten blobs of steel can be spit out into the air, and the zero gravity lets them float in the air. The blobs automatically make perfect spheres while they cool and harden. However, space travel is still expensive, so a lot of polishing can be done on the ground for the cost of one "space ball".

Other kinds of bearings are on the horizon, though. Bearings where the two objects never touch each other at all are efficient to run but difficult to make. One kind uses magnets that push away from each other and can be used to hold things apart. This is how the "mag-lev" (for magnetic levitation) trains are built. Another kind forces air into a space between two close-fitting surfaces, making them float apart from each other on a cushion of compressed air. However, both of these bearings are much more expensive to build and operate than the humble, trusted ball bearing.